The Blog Where Art Lives

Two paintings by Thomas Gainsborough (English, 1727–1788) hang opposite each other in the Taft Museum of Art’s Music Room. On the south wall, two boys dressed in finery look out from a canvas measuring nearly seven feet high. This portrait represents Gainsborough’s bread and butter: flattering likenesses of the British elite. On the north wall, a more modestly sized painting features livestock and rustic peasants dramatically lit within a shadowy copse of trees. This pastoral scene embodies Gainsborough’s true passion: the landscape of England’s countryside. “I am sick of portraits,” he wrote to a friend, “and wish very much to take my viol da gamba and walk off to some sweet village where I can paint Landskips and enjoy… Life in quietness & ease.”

Portrait painting, or as Gainsborough called it, the “curs’d face business,” was arduous work. His clients were often difficult and demanding, and long hours standing at an easel took a toll on his body. Gainsborough complained to a friend, “The perplexities of rendering something like a human resemblance… was a trial of patience that would have tempted holy St. Anthony to cut his own throat with his palette-knife.” In turn, his friend described Gainsborough at work: “If a portrait happened to be on the easel… he was in the humour for a congenial growl…. If, on the contrary, he was engaged in a landscape composition, then he was all gaiety—his imagination in the skies.”

Why, then, didn’t Gainsborough quit painting portraits? Because, in his day, only a limited number of collectors purchased landscapes, but a skilled artist could earn a lucrative income from portrait commissions Gainsborough could not live on landscape painting alone.

This did not stop Gainsborough from painting and exhibiting landscapes, however. He had spent his childhood exploring the countryside around his home in Suffolk, where he began his lifelong practice of drawing outdoors. In a self-portrait drawing, the artist depicted himself seated beneath a tree, sketchbook and pencil in hand. Gainsborough completed the portrait in his studio before a mirror, cut it out, and attached it to a separate landscape drawing. This process of combining background and figure into an imagined composition was similar to his approach to painting landscape. 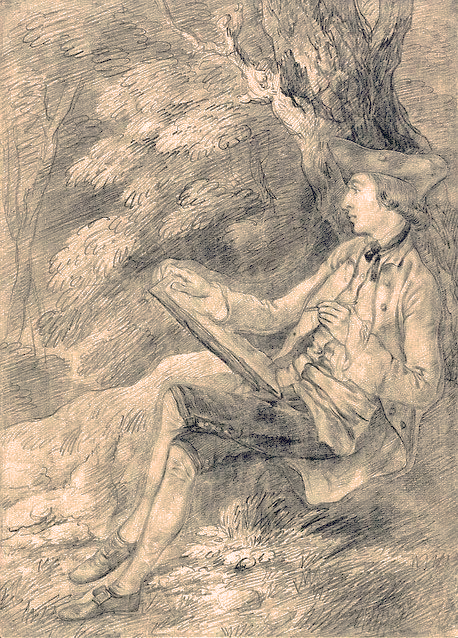 Thomas Gainsborough, Self Portrait, about 1755, graphite on two sheets of paper. British Museum of London, 1988,0305.59 ©The Trustees of the British Museum

In the Taft’s Wooded Landscape, dense trees stand against a dramatic, almost turbulent, sky. Sunlight sweeps down between the clouds, illuminating three figures. One carries a basket upon her head while a couple sits in amorous reverie nearby. Behind them, cattle, sheep, goats, and a herdsman complete the idyllic arrangement. About a decade later, Gainsborough painted A Coastal Landscape. The scene is airier, more open and light-filled than the Taft’s painting. A group of cattle, tended by a milkmaid, overlook a calm sea populated with boats and fisherman quietly going about their business. Rising cumulus clouds mirror the shape of the low bluff upon which the cows stand.

Gainsborough would have constructed these paintings using a series of sketches and his memory. To create convincing scenes, he employed his imagination, skill, and knowledge built from years of observing nature. He often made several drawings to work out a composition until he settled on a final design. Some visual evidence of this method exists in the paintings themselves. In both the Taft and Berger landscapes, the cows in the background would tower over the figures in the foreground if they were placed next to each other. This skewed scale suggests that the animals and people were likely assembled from various unrelated sketches. Two figures in A Coastal View—a fisherman standing with a basket on his head, and a person lounging on shore, leaning on a basket—closely resemble figures in Wooded Landscape. It’s possible that the artist used the same source sketches for them.

In his landscapes, Gainsborough did not concern himself with specific likenesses, but instead he included people simply to offer “a little business for the Eye to be drawn from the Trees in order to return to them with more glee.” Certainly, the tranquil settings of these paintings would have provided a lovely respite from Gainsborough’s hectic career in portraiture.